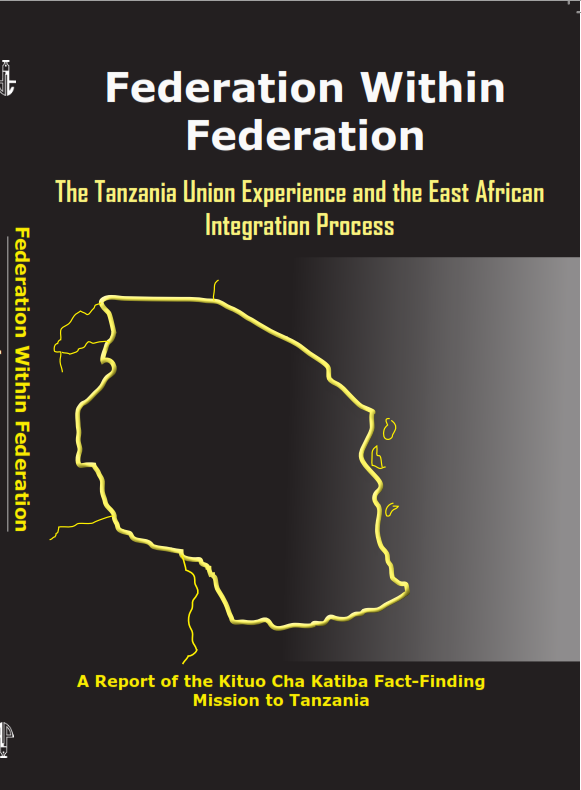 Federation Within Federation: The Tanzania Union Experience and the East African Integration Process.

KCK organised the fact-finding mission in two legs; the first to Unguja Zanzibar, which was undertaken from 13 to 16 July 2009. The second was undertaken in Tanzania Mainland from 23 to 28 August 2009. The mission also subsequently visited Pemba from 19 to 20 April 2010.

The mission team comprised the following:

Objectives of the Fact-Finding Mission

The main objective was to examine areas of tension relating to the Union between Tanzania Mainland and Zanzibar with respect to enhancing Zanzibar’s role in the East African Community (EAC) processes and to devise ways and means of resolving them. 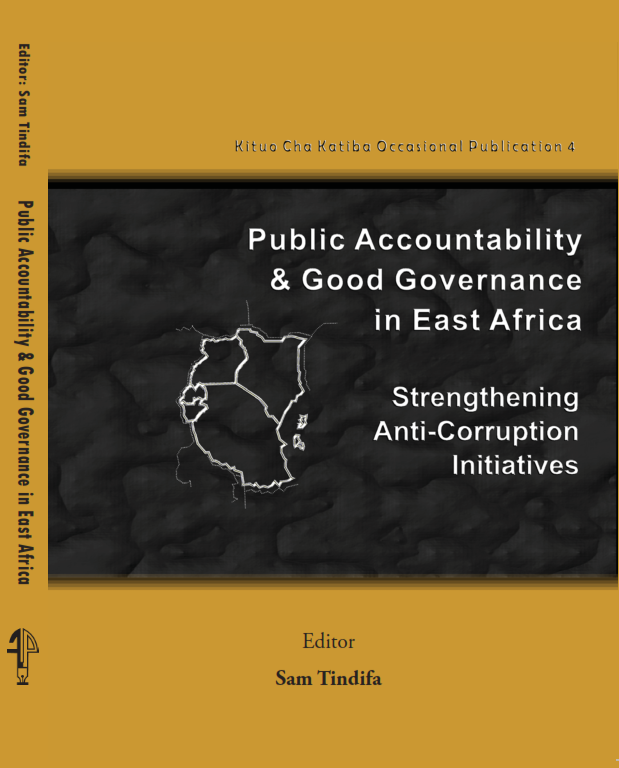 The importance of this book is its contribution to the debate on anti-corruption initiatives, the sustainability of accountability and transparency in government functions in East Africa. Corruption is one of the worst governance issues in the East African countries.
The initiative by Kituo Cha Katiba (KCK) “to bring together representatives from lead regional institutions to dialogue and reflect on common approaches” in fighting corruption and strengthening public accountability is a commendable effort. It shows the concerns of civil society and its increasing contributions to the war against the scourge that undermines democratic governance and development. Participants at the workshop bore various experiences and absence of those directly involved in anti-corruption denied the workshop
their knowledge and experience. Their presence would have enabled the sharing of experience with those institutions engaged in policymaking and implementation. 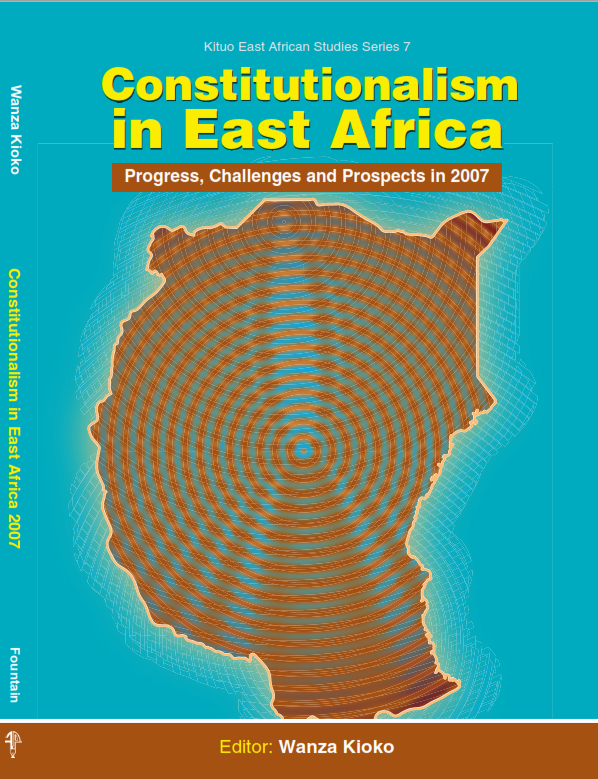 Constitutionalism in East Africa Progress, Challenges and Prospects in 2007

The East African Community (EAC), now encompassing ﬁve states after Rwanda and Burundi joined in 2007 expressed a commitment to the rule of law, good governance and respect for human rights under article 6(d) of the East African Treaty of 2000. The article sets out the fundamental principles that shall govern the relationship between members of the Community. Based on this principles, East Africans have committed themselves to enhance constitutionalism in the region in order to improve the manner in which the region is governed. Enhancing constitutionalism and the rule of law is key to achieving Objective 1 under Article 5 of the Treaty which is the attainment of greater economic prosperity of the region, regional security and political stability. 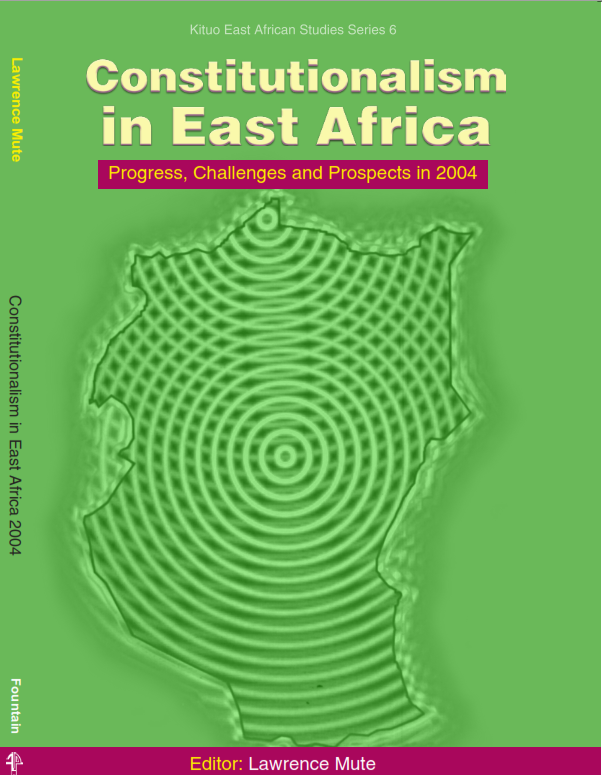 Ever so often in the histories of a state or region, a congenial trajectory of gradual democratisation is put to a shuddering stop by circumstances more often than not designed by state elites rather thanchanced or dictated by the masses.  When this happens, the masses are left wondering how it is ever possible for their political leaderships to change so dramatically – from fervent espousal of adherence to constitutionalism and the rule of law to contempt for its principles. By the end of the year 2004, the rapid expansion of democratic
space within the East African region was experiencing jitters which, if not contained, could have resulted in an anticlimactic diversion away from the path of democratisation and constitutionalism.  This condition was most apparent within the context of Kenya’s drawnout
constitution-making process; but it was clearly present in Uganda too.
In Zanzibar,legislative changes were employed in a cynical way to ensure electoral success for the incumbent Chama Cha Mapinduzi (CCM) government 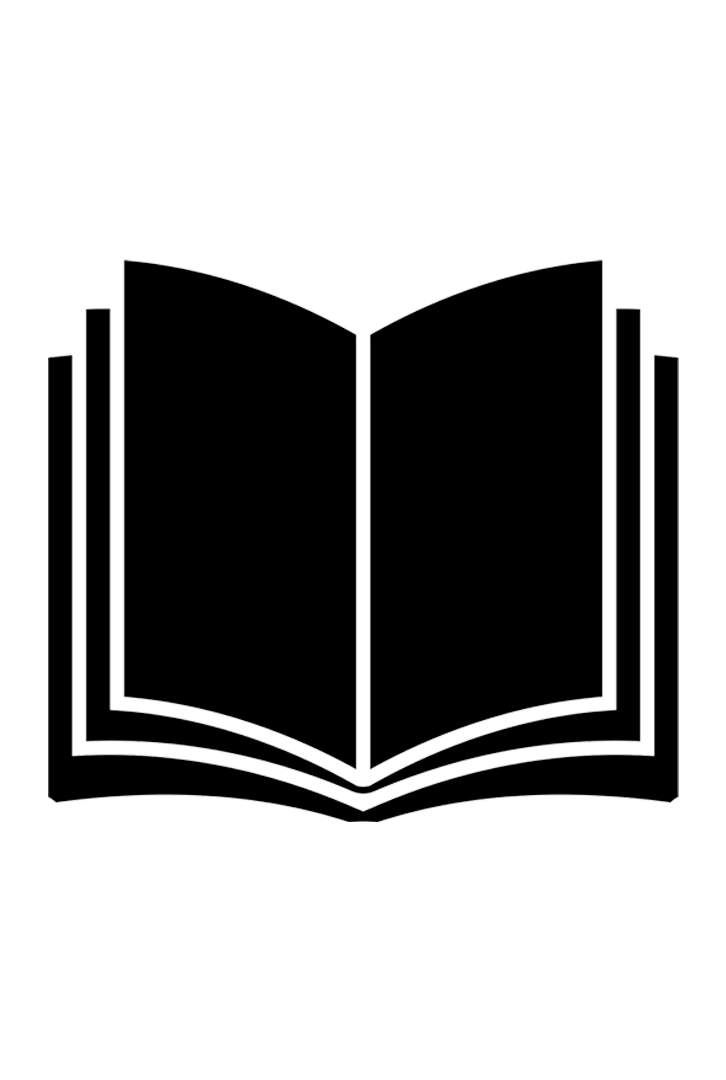 One of the most important developments in Africa in recent years has been the revival of
the East African Community (EAC), with Kenya, Uganda and Tanzania as its members.
Before its collapse, the old EAC was regarded as one of the most successful experiments in regional economic integration on the Continent. Due to ideological differences among and within the three countries, the perceived domination f the Kenyan economy and the Idi
Amin-led military coup in Uganda in 1971, this promising experiment in regional economic
integration came to a premature and painful end in 1977.  Twenty-two years after the ignominious collapse, the Community appears to have arisen from the ashes of the old.
On 1 December 1999, the new EAC was launched in Arusha, Tanzania. This was preceded by eight years of protracted and gradual negotiations that culminated in the signing of the Treaty Establishing the East African Community on 30 November 1999.
This paper explores the status of constitutionalism in the three states of Kenya, Uganda and
Tanzania; and the actual and potential role of the EAC in promoting constitutionalism in the
region. In so doing, it analyzes the constitutional and political developments in the three
states during 2005, and examines the constraints and opportunities for the EAC to enhance
constitutionalism in the region. 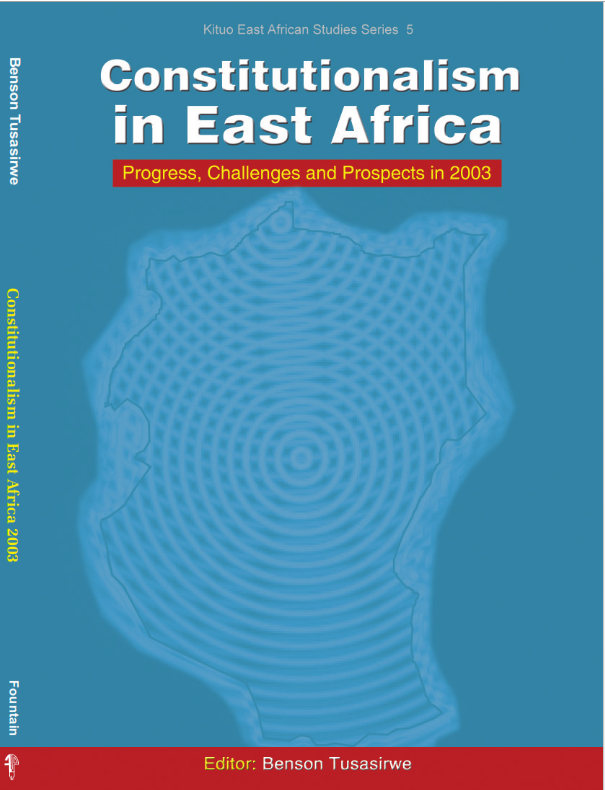 When, in 1999, Kituo Cha Katiba undertook to produce annual analyses of constitutional developments that occurred in East Africa, it was very easy for the pessimist to wonder whether there would be developments worth reporting to justify the intended study series. Our imaginary pessimist’s reservations would be understandable, considering that for decades the region, like most of sub-Saharan Africa, had been mired in tyranny, state-inspired abuse of human rights and in many cases, a near-total collapse of constitutionalism and the rule of law. What then was there to report and analyse year after year regarding
“constitutional developments” in such a region other than a repetitive litany of excesses?
In “the Constitutional Development in East Africa” annual studies have now been published on four occasions.  This instant one, the fifth in the series, more than justifies the decision to embark on this project. present compendium, like its predecessors, contains a country report
for each of the three states – Uganda, Kenya and Tanzania, and one focusing on the East African Community (EAC).  The common thread that runs through the four reports is the interest which the people of all the three countries continue to exhibit in matters relating to governance and human rights, in short, to constitutionalism.  In all three country reports, one notes an on-going process of the re-examination and the re-adjustment of the existing constitutional order – for better or for worse  –  a process involving not just state players, but the general populace as well. 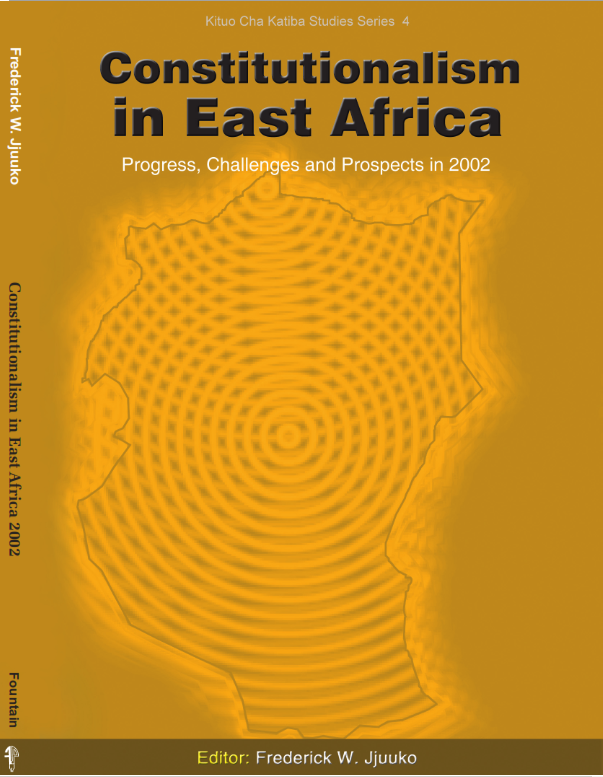 The most momentous development in the area of constitutionalism in East Africa in the year 2002, was the end-of-year gift the Kenyan people delivered to East Africans. A tardy and reluctant arrival,  the successful presidential elections  resulted in the peaceful hand over of power by former President Daniel arap Moi to President Mwai Kibaki, on December 30, 2002. It thus saw the end of the rule of the Kenya African National Union (KANU), in power since Independence in 1963, thereby heralding a new era and inspiring  optimism not only in Kenya, but in the whole region and well beyond East Africa.  This is one of the numerous constitutional developments that took place in the East African region.
This publication documents and analyses the state of constitutionalism in East Africa for the year 2002. It recounts significant events in the three countries, attempts to put meaning to these events by placing them in their historical context and within the constitutional framework of the given country. This publication also attempts to look to the future a adumbrated by the developments in the year. The other subject of this publication is regional constitutionalism in the form of the East African Community and its institutions. There are therefore, four papers assembled in this compendium – three country papers and one on the
East African Community.  The four papers share a lot in common, not least, naturally, the subject matter, but also differ in their style and approach to the subject matter.

The post-cold war liberal model of democracy was swallowed lock, stock and barrel by a large majority of East African scholars, including its radical wing. As a consequence, ten years down the line, there is cynicism and skepticism across the social spectrum. The so-called "international community", to use the grossly inaccurate term for the Western hegemonic powers, is utterly disgusted with the performance of the "new" African democracies. If they continue to pay them lip service, it is because they would not want to lose their recaptured backyard to the uppity Asian lion (China) or the South East Asian tigers. African politicians-in-power and the African masses did not take the promise of the new democratic El Dorado seriously,albeit for different reasons. While the power elite dragged its feet or made ‘paper’ reforms, the masses were sidelined as spectators of the unfolding drama of multi-party squabbles, rigged elections and doctrinal constitutional changes.

There is a predictable, if somewhat depressing consistency between the studies of
constitutional development in the three countries surveyed in the present compendium
which covers the year 2001.  That consistency lies in the continuing prominence of the
issue of constitutionalism to the peoples of the region—a prominence that barely a
decade ago would have been described as academic at best, or misplaced and irrelevant,
at worst.  Whether one looks at the traditional organs of the state—the Executive, the
Legislature, or the Judiciary—or to the struggles by the masses for more directive
methods of representation and participation in each of the countries examined, one
discerns that THE CONSTITUTION is becoming an ever more conscious site for
struggle, whether of a social, political or an economic nature.  Thus, state functionaries
will evoke the Constitution to justify the most undemocratic and coercive measures, even
as members of the opposition seek recourse in the very same instrument to advance their
causes for enhanced participation, expression and access. 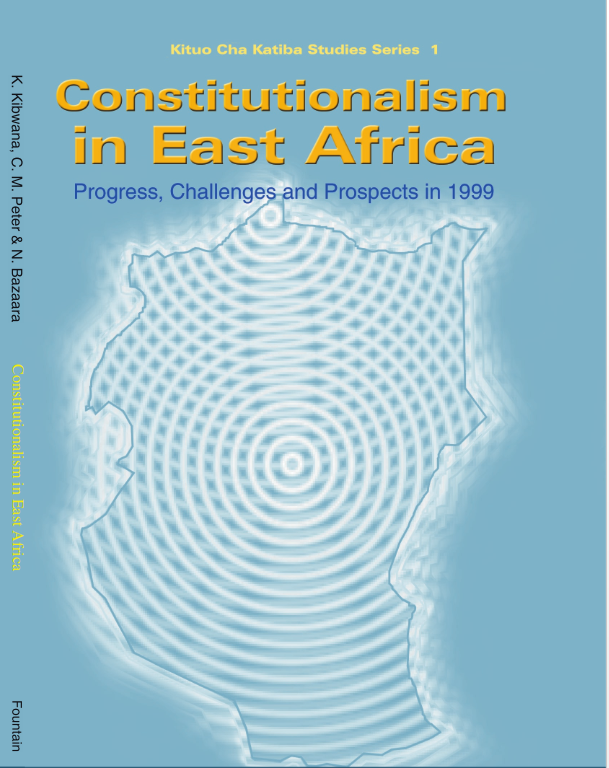